Fresh water is one of the most basic conditions for human survival, and water scarcity and environmental pollution are the main factors that restrict water supply in cities and towns. Water supply pipeline leakage is a waste of precious water, he not only increases the cost of water purification, but also additionally increases the investment cost of water supply facilities, at the same time, it also leads to some secondary disasters. Therefore, it has become the consensus of all mankind to protect water sources, conserve water, detect leaks and reduce losses. At present, most cities in the international are using passive leak detection method or this method is the main method, and the law of underground pipeline leakage is from dark leakage to open leakage, sometimes the dark leakage of water into the river, sewer or cable trench after never into the open leakage, so the potential of the international city water division to reduce leakage consumption is still quite large. Doing a good job of leak detection can greatly improve the effective water supply capacity, which is of great significance to save water and improve the social and economic benefits of the water division.

According to long-term practical observation and research, water leakage abundance to have the following reasons. (1) Construction carelessness leads to pipeline damage. In the process of site excavation, leveling, road construction, rolling, etc., the construction unit does not understand the detailed location of the underground pipeline, resulting in bruising, crushing and digging out the pipeline.

(2) Poor quality of pipeline construction, including.

(1) Poor pipeline foundation. Uneven soil softness at the bottom of the pipe trench, resulting in uniform sinking of the pipeline damaging the joint.

③Welding according to the quality is not satisfactory. pipe welds with slag, porosity or uneven welds and other serious welding defects.

④The flange connection is irregular. If the aging rubber gasket or not according to the number of holes in the flange and fastening way on the bolt, resulting in uneven force, etc..

⑤ Poor pipeline corrosion protection. Not operated according to the standards and requirements of the pipe anti-corrosion layer, or no special treatment at the destruction of the galvanized layer of the pipe wall.

(3) Valve quality problems. Due to poor valve packing, resulting in often a small amount of water leakage at the valve stem.

(4) Hydrant leakage. Part of the hydrant product quality is poor, old and dilapidated, as well as man-made damage and other reasons, resulting in the closure is not tight.

The type of water supply pipe leakage sound and propagation

The task of water supply pipeline is to deliver clean water to users to meet the most basic needs of people. However, leaks can occur in water supply pipes, and when they do, the water ejected from the pipe rubs against the leak, as well as impacts with surrounding media, etc., producing vibrations of different frequencies and resulting in leak sounds. The types of water leakage sound can usually be divided into three kinds.

Pipeline leak detector works on the principle of pressure water pipe leak after the pressure water from the pipe break out of the mouth, and the pipe wall friction generated by the sound vibration and other additional vibration caused by the transmission to the pipe above the ground, with the instrument in the road to detect and find out the leak. 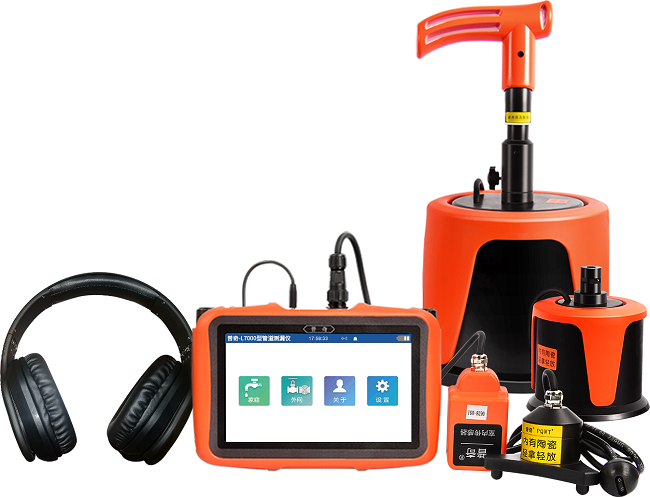 In general, the basic detection method is, connect the pipe leak detector host, headphones, sensors. Turn on the switch, put on the headset, place the sensor on the road above the pipeline, place it step by step according to the length of the pace, and listen to it step by step, the closer to the leak, the stronger the signal, and the farther away from the leak the weaker the signal, and achieve the purpose of detecting the leak by comparing the signal strength between different points. Therefore, we use the instrument, a single point to listen to the leak signal is not meaningful, to multi-point repeatedly compared, compared with the sound vibration of the larger place is the leak, of course, we have to consider many other additional factors, such as the direction of the leak breakage mouth, because the pipe is round, if the side of the leak, may be larger points instead in the side of the road above the pipe, rather than being the pipe Above the road, so the location of the pipeline to know, in addition to the tee, bend, water pressure, burial depth, buried layer, etc. will have an impact on the detection to take these into account.