Water utilities in many parts of the world are facing growing challenges in their attempts to meet the demand for drinking water. For example, in the United States more than 36 states expect to experience water shortages over the next 10 years . Another major example is China where more than 400 of its 600 large and medium sized cities suffer from water shortages, with at least 100 cities, including Beijing, seriously threatened . Several factors are contributing to this situation. Climate change, manifested by extended periods of drought, is adversely impacting water resources. Population growth caused by migration to large urban centers and temperate regions is exerting increasing pressure on existing water supplies. The problem is compounded if water treatment infrastructure is operating near capacity and funds required for expansion are scarce. Limited treatment capacity can create drinking water shortages even in water-rich regions. In the face of these challenges, the recovery of water loss from leaks in transmission and distribution pipes can provide a solution, at least partially, to shortages caused by insufficient water resources and / or limited treatment capacity. Water transmission and distribution networks deteriorate naturally with time and subsequently loose their initial water tightness. Causes of the deterioration include corrosive environments, soil movement, poor construction standards, fluctuation of water pressure, and excessive traffic loads and vibration. Water is lost due to leakage in different components of the networks that include transmission pipes, distribution pipes, service connection pipes, joints, valves, fire hydrants, and storage tanks and reservoirs. In addition to the physical losses due to leakage, many networks suffer from so called apparent losses. These are caused by underregistration of customer meters, accounting errors, and unauthorized water use. The amount of water loss is typically between 20 to 30% of production, with leakage being the main component. For some distribution systems, the loss can be in excess International Water Demand Management Conference 30 May to 3 June 2004, Dead Sea - Jordan 2 of 50%. In addition to their help in meeting water demand, detection and repair of pipe leaks help to minimize water quality breaches that may result from the entry of contaminants via leaks. They also help to reduce the high cost of energy wasted on the treatment and pumping of leaking water . The energy-wasting aspect of leakage is important as significant savings can be realized. Energy to supply water is the second largest cost after labour for water systems in developed countries, and the cost may easily consume 50% of a municipality’s budget in the developing world. Acoustic equipment is commonly used to locate leaks in municipal water pipes. These include noise loggers, simple listening devices, and leak noise correlators. The economic viability and leak detection effectiveness of noise loggers is questionable. Also, they are not suitable for pinpointing leaks. The effectiveness of listening devices such as ground microphones for pinpointing leaks depends greatly on the experience of the user and the process is timeconsuming. Leak noise correlators are more efficient, yield more accurate results and depend less on user experience than do listening devices. Existing correlators, however, require extensive training and can be unreliable for quiet leaks in cast and ductile iron pipes and for most leaks in plastic and large-diameter pipes. Correlators are also expensive and remain beyond the means of many water utilities and leak detection service companies. A new leak noise correlation system is introduced in this paper.

Leak Detection Equipment Acoustic Equipment Listening devices. These devices include listening rods and ground microphones and may be either mechanical or electronic. They use sensitive mechanisms or materials such as piezoelectric elements to sense leak-induced sound or vibration. Modern electronic listening 4 devices incorporate signal amplifiers and noise filters to make the leak signal stand out. Leak inspectors conducting leak surveys work their way around the pipe network systematically and use listening rods at appropriate pipe fittings to detect the characteristic hissing sound created by leaking water. The leak detection effectiveness of listening surveys depends on the size of leaks, ambient noise from road traffic and water draw, and the degree of detail of the survey. General surveys, performed by listening at only convenient fittings such as fire hydrants and / or valves, mainly detect large leaks. On the other hand, detailed surveys conducted by listening at all pipes fittings, including curb-stops (or stop-taps), can detect small leaks. Ground microphones are used to pinpoint leaks by listening for leak noise at the ground surface directly above pipes at small intervals. This process is time consuming and its success depends on the experience of the user. Noise loggers. These are compact units composed of a vibration sensor (or hydrophone) and a programmable data logger. They are used to leak survey large areas but they are not suitable for pinpointing leaks. Loggers are deployed in groups of 6 or more at adjacent pipe fittings, e.g., fire hydrants and valves 200 to 500 m apart, and left there overnight. The units are normally programmed to collect pipe noise data between 2 and 4 AM. The loggers are collected the next day and the stored data are downloaded to a personal computer before the loggers are deployed at the next location. The logged data are analysed statistically, e.g., frequency analysis of leak noise levels, to detect the presence of leaks. Recent models of acoustic noise loggers can be deployed permanently – leak noise is processed using onboard electronics and the stored result is transmitted wirelessly to a roaming receiver. The economic viability and leak detection effectiveness of temporarily or permanently deployed noise loggers is questionable. van der Klejj and Stephenson (2002) found that both permanently and temporarily deployed loggers are not an economical alternative to skilled and well-equipped leak inspectors. For network-wide coverage, permanent loggers had a minimum payback period of 25 years. When the loggers were used in temporary mode, i.e., moved from one survey area to the next, they were three times less efficient than acoustic surveys. van der Klejj and Stephenson (2002) also report that the number of leaks found by noise loggers and by general listening surveys were similar; however, the loggers failed to detect approximately 40% of leaks found in detailed listening surveys. Acoustic loggers can be advantageous over listening surveys in instances where the latter cannot be undertaken during daytime due to high ambient noise. Leak noise correlators. These are portable microprocessor-based devices that can be used in either leak survey or pinpointing modes. They are based on the cross-correlation method, which involves the measurement of leak noise (either sound or vibration) at two locations on a pipe section. Measured noise is transmitted wirelessly to the correlator, which then determines the position of the leak based on the time shift of the maximum correlation of the two leak signals, propagation velocity of leak noise, and the distance between sensing points. The distance between sensors can be read from distribution system maps when the correlator is used in survey mode but it should be measured onsite accurately when it is used in pinpointing mode. Propagation velocities for various pipe types and sizes are programmed in most correlators, but they should be measured onsite to improve pinpointing accuracy, especially for non-metallic pipes. Leak noise correlators are more efficient, yield more accurate results and are less dependent on user experience than listening devices. However, existing equipment requires extensive training and can be unreliable for quiet leaks in cast and ductile iron pipes and for most leaks in plastic and large diameter pipes. Correlators are also expensive and remain beyond the means of many water utilities and leak detection service companies. The new correlator presented in this paper overcomes these shortcomings. 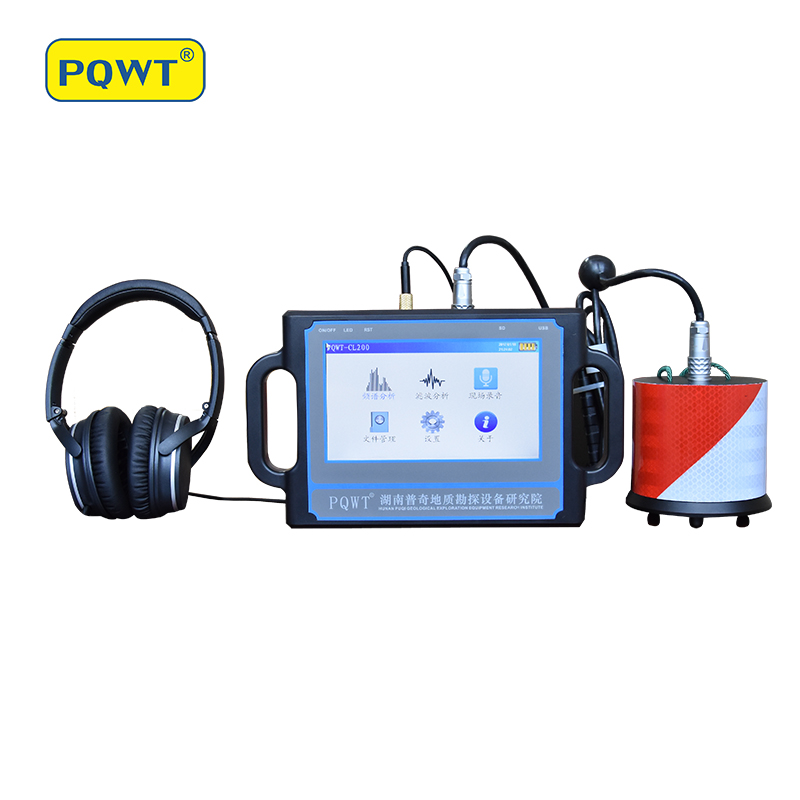 PQWT-CL series pipe leak detector is a professional water leakage detecting device for water supply companies, heating companies, municipal construction companies and property companies. They are mainly used to find and determine the location of leakage points of water supply pipeline, and they can also be used to detect the leakage of other pressure piping systems. When the fluid in pipeline erupts through leakage source due to pressure, the noise produced by the impact on internal wall will spread along the pipeline or along the buried layer medium to the ground, and the device can determine the leakage source through the amplification of leakage noise and analyze the spectrum signal.

4. Applicable to all kinds of pipeline material and ground

5. Setting the function of rough measurement and accurate measurement to quickly lock the leaking point