The Water Table: A hole dug at the beach showing the "water table" level.

A hole dug at the beach is a great way to illustrate the concept of how, below a certain depth, the ground, if it is permeable enough to hold water, is saturated with water. The upper surface of this zone of saturation is called the water table. (Credit: Howard Perlman, USGS) 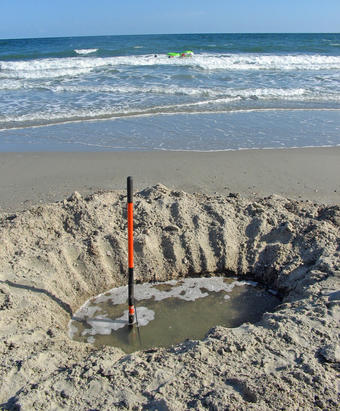 I hope you appreciate my spending an hour in the blazing sun to dig this hole at the beach. It is a great way to illustrate the concept of how, below a certain depth, the ground, if it is permeable enough to hold water, is saturated with water. The upper surface of this zone of saturation is called the water table. The saturated zone beneath the water table is called an aquifer, and aquifers are huge storehouses of water. What you are looking at in this picture is a "well" that exposes the water table, with an aquifer beneath it. Of course, I am cheating here, as at the beach, the level of the water table is always at the same level as the ocean, which is just below the surface of the beach.

Groundwater is one of our most valuable resources—even though you probably never see it or even realize it is there. As you may have read, most of the void spaces in the rocks below the water table are filled with water. These rocks have different porosity and permeability characteristics, which means that water does not move around the same way in all rocks below ground. 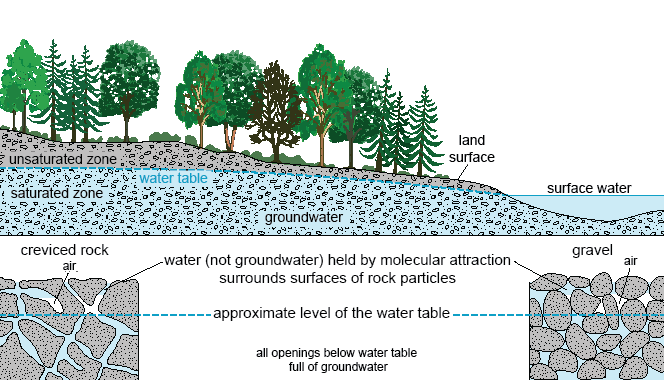 When a water-bearing rock readily transmits water to wells and springs, it is called an aquifer. Wells can be drilled into the aquifers and water can be pumped out. Precipitation eventually adds water (recharge) into the porous rock of the aquifer. The rate of recharge is not the same for all aquifers, though, and that must be considered when pumping water from a well. Pumping too much water too fast draws down the water in the aquifer and eventually causes a well to yield less and less water and even run dry. In fact, pumping your well too much can even cause your neighbor's well to run dry if you both are pumping from the same aquifer.

In the diagram below, you can see how the ground below the water table (the blue area) is saturated with water. The "unsaturated zone" above the water table (the gray area) still contains water (after all, plants' roots live in this area), but it is not totally saturated with water. You can see this in the two drawings at the bottom of the diagram, which show a close-up of how water is stored in between underground rock particles. 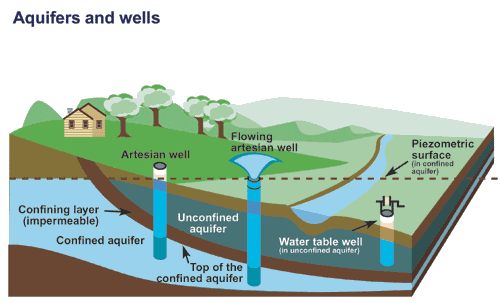 Diagram of how groundwater occurs underground

Sometimes the porous rock layers become tilted in the earth. There might be a confining layer of less porous rock both above and below the porous layer. This is an example of a confined aquifer. In this case, the rocks surrounding the aquifer confines the pressure in the porous rock and its water. If a well is drilled into this "pressurized" aquifer, the internal pressure might (depending on the ability of the rock to transport water) be enough to push the water up the well and up to the surface without the aid of a pump, sometimes completely out of the well. This type of well is called artesian. The pressure of water from an artesian well can be quite dramatic.

A relationship does not necessarily exist between the water-bearing capacity of rocks and the depth at which they are found. A very dense granite that will yield little or no water to a well may be exposed at the land surface. Conversely, a porous sandstone may lie hundreds or thousands of feet below the land surface and may yield hundreds of gallons per minute of water. Rocks that yield freshwater have been found at depths of more than 6,000 feet, and salty water has come from oil wells at depths of more than 30,000 feet. On the average, however, the porosity and permeability of rocks decrease as their depth below land surface increases; the pores and cracks in rocks at great depths are closed or greatly reduced in size because of the weight of overlying rocks.

Pumping can affect the level of the water table

Groundwater occurs in the saturated soil and rock below the water table. If the aquifer is shallow enough and permeable enough to allow water to move through it at a rapid-enough rate, then people can drill wells into it and withdraw water. The level of the water table can naturally change over time due to changes in weather cycles and precipitation patterns, streamflow and geologic changes, and even human-induced changes, such as the increase in impervious surfaces on the landscape.

The pumping of wells can have a great deal of influence on water levels below ground, especially in the vicinity of the well, as this diagram shows. If water is withdrawn from the ground at a faster rate that it is replenished, either by infiltration from the surface or from streams, then the water table can become lower, resulting in a "cone of depression" around the well. Depending on geologic and hydrologic conditions of the aquifer, the impact on the level of the water table can be short-lived or last for decades, and it can fall a small amount or many hundreds of feet. Excessive pumping can lower the water table so much that the wells no longer supply water—they can "go dry."

Schematic of drawdown as a result of overpumping

Schematic showing a cone of depression around the well, usually the result of overpumping. (Credit: Tara Gross, USGS)

Water movement in aquifers is highly dependent of the permeability of the aquifer material. Permeable material contains interconnected cracks or spaces that are both numerous enough and large enough to allow water to move freely. In some permeable materials groundwater may move several meters in a day; in other places, it moves only a few centimeters in a century. Groundwater moves very slowly through relatively impermeable materials such as clay and shale. (Source: Environment Canada)

After entering an aquifer, water moves slowly toward lower lying places and eventually is discharged from the aquifer from springs, seeps into streams, or is withdrawn from the ground by wells. Groundwater in aquifers between layers of poorly permeable rock, such as clay or shale, may be confined under pressure. If such a confined aquifer is tapped by a well, water will rise above the top of the aquifer and may even flow from the well onto the land surface. Water confined in this way is said to be under artesian pressure, and the aquifer is called an artesian aquifer. 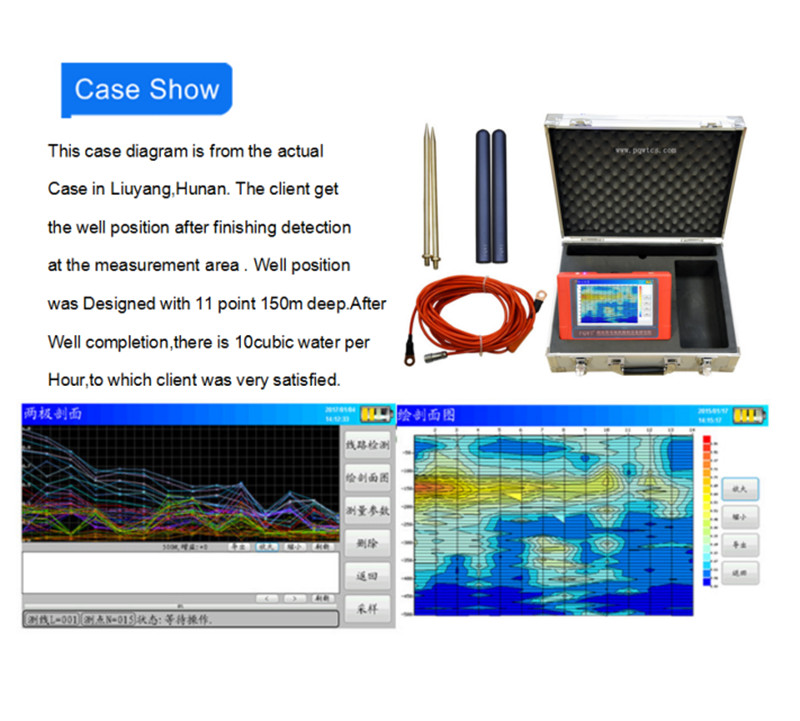 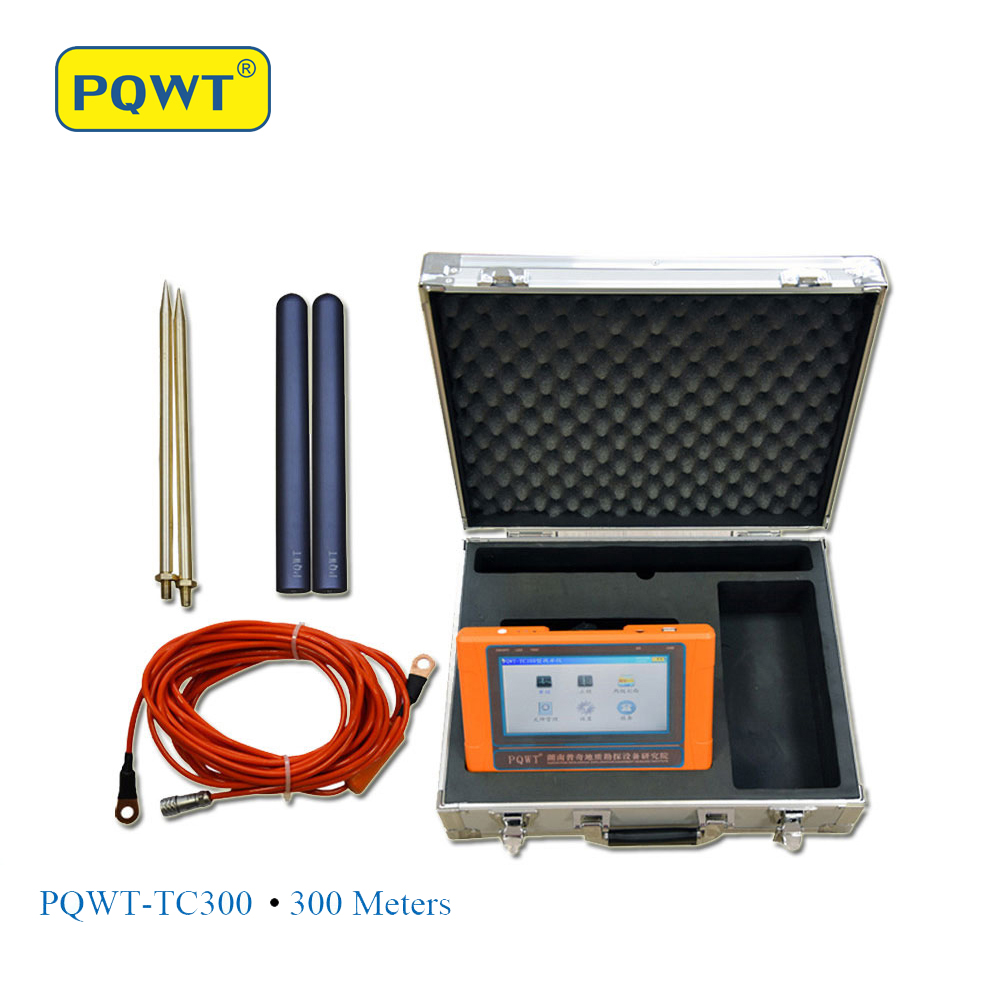