The main purpose of the natural electric field groundwater detector is to optimize the well location, and the meaning of physical prospecting is lost if it is not optimized and is equivalent to blind drilling. Assuming that the measured profiles are real and reliable (can be retested), we have some rules to follow after observing and testing a large number of natural electric field profiles. 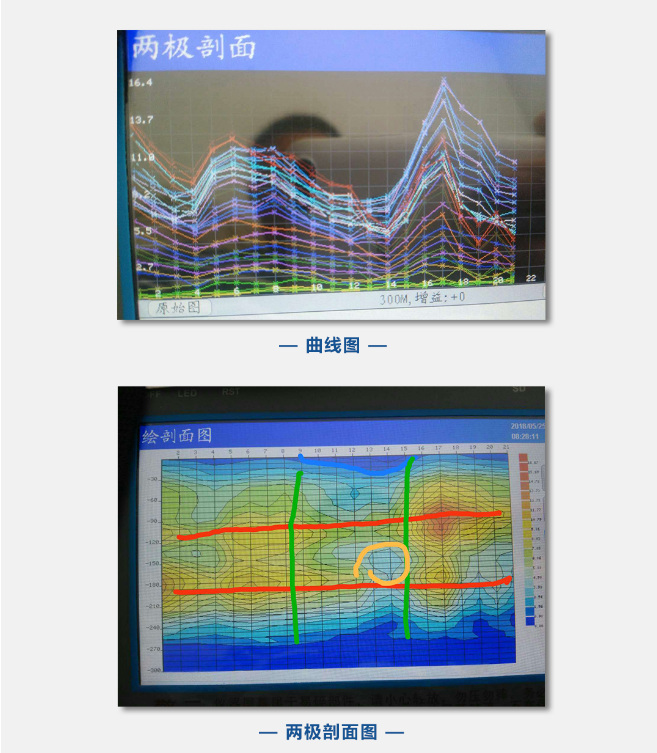 1. If the profile along the lateral observation will find that, in addition to a few disorderly and disordered map, most of the map is roughly can be seen as continuous or non-continuous horizontal into the layer, the more measurement points stratification phenomenon to see the more obvious, some layers are relatively high value, some layers are relatively low. Regardless of the high or low resistance layers, some contours are horizontal, some are undulating, or even vertical, but if several high value circles (or low value circles) are linked together, they are still close to horizontal. Due to the serious disproportion of the vertical and horizontal ratio of the astrographic map, no matter the dip angle of the rock layer is large or small, it is true that the rock layer behaves roughly horizontal in the profile with depth of several hundred meters and width of only several tens of meters.

3. To identify whether the high resistance band or low resistance band is caused by the skinning effect in a diagram with vertical banding, we must first look at the relative size of the shallow values. If the shallow value is small compared with the left and right or the thickness of the blue color is large, and the corresponding measurement points are smaller than the left and right, it can be judged that the low-resistance band is a shallow low-resistance downward transmission caused by the shadow. By the same token, the shadow caused by shallow high resistance downward transmission can also be judged. The values in the shadow are not real and cannot reflect the real resistivity condition of the rock layer in this part.

4. In the map with vertical zoning phenomenon, the combination of high resistance zone and low resistance zone will appear in the map with dense contours, steeply inclined or upright. If the cause of this phenomenon has been determined to be due to skin effect, then it is an artifact. In this case, no matter the well position is set at high value, low value, high side or low side, it is not necessarily the best well position, and it is no different from blind drilling.

6. As long as the lithology of the shallow layer changes skin effect will often exist, in the case of skin effect can not be avoided it is best to measure more lines for comparison. If there is only one line to choose, the following considerations can be made: First, in the high value belt on both sides of the choice of high and low values of the interlocking points; Second, choose the high resistance belt from one side of the horizontal insertion of the low value of the wedge-shaped layer of points; Third, in view of the distortion of the value of the high resistance or low resistance of the lower transmission, you can break the constraints of the high resistance belt low resistance belt box, not bound by its combination, choose the non-lower transmission of the cause of the V-shaped points. or choose the point with a large difference in value compared with the upper and lower layers.

8. For a single point of low resistance downward transmission formed by the low resistance column is also a multi-solution problem. When the shallow part of the fault fracture zone is better weathered also forms blue pillars, but the blue pillars are mostly caused by the bad lithology of the shallow part. The former possibility can be considered only in old strata with more faults, and the probability of low-resistance underpass being a fault is much smaller in other strata.

9. Some profiles have horizontal contours, indicating that the lithology reflected in the map is stable in the lateral direction, the electrical properties of the surface are uniform, and the skin tending phenomenon is not obvious. In such a map, as long as the high-resistance and low-resistance layers are layered with each other, the values are larger and the water content is generally better. If the value is very small, or shallow value is large, the deeper the value is smaller, indicating that the mineral composition of the rock is not good, not conducive to fracture development, whether the well can be set mainly depends on the thickness of the shallow high resistance layer and lithological conditions. If the value of the shallow layer is small, the deeper the value is large, it means that the shallow layer is weathered and the deep layer is not weathered well and the fissure is not developed. Crystalline rocks and carbonate rocks are easy to have water in the weathered layer below the water table, and muddy rocks are less likely to have water.

10. Occasionally, one or two isolated high resistance bodies are encountered in the profile, not stratified horizontally, not stratified vertically, rounded above and flat at the bottom, surrounded by a deep blue, like a colorful concentric circle of onyx in a basin of water, this type is generally waterless.

Natural electric field groundwater detector has its unique advantages, but also has a number of complex factors (including the transient nature of the signal and noise interference), need to be taken seriously, and not to simplify the complex things. 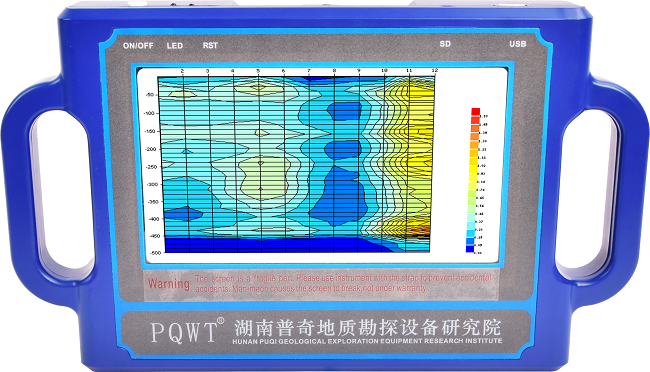