The resistivity ρ of permafrost is extremely high and can be dozens of times higher than when there is no permafrost. In northeast China, the thickness of permafrost in winter can reach 1.6m" (mostly 1 to 3m). Northeast and other areas have permafrost for more than half a year, if the surface layer is frozen can not be measured, the surface layer is thawed but the deep layer is not thawed or can not be measured, it will seriously affect the measurement of water and drilling wells, to a certain extent, restrict the national economic development.

1、from an actual measurement

2. Study on the relationship between permafrost resistivity and its temperature

3, From the above paper, it can be seen that there are several factors affecting the resistivity magnitude of frozen soils as follows.

In the case of high resistance shield layer severely impede the current downward penetration, using conventional artificial electric field method to measure water is very difficult. Fortunately, the natural electric field ground water detectors have become increasingly sophisticated. Electromagnetic waves are not afraid of high resistance layer, high resistance layer is not easy to absorb electromagnetic waves, so it is easier to penetrate the permafrost layer downward propagation, which provides the conditions for us to overcome the conventional electric method of this problem. The purpose of this paper is to throw a brick to draw in the jade, and call on everyone to dare to think and explore together. 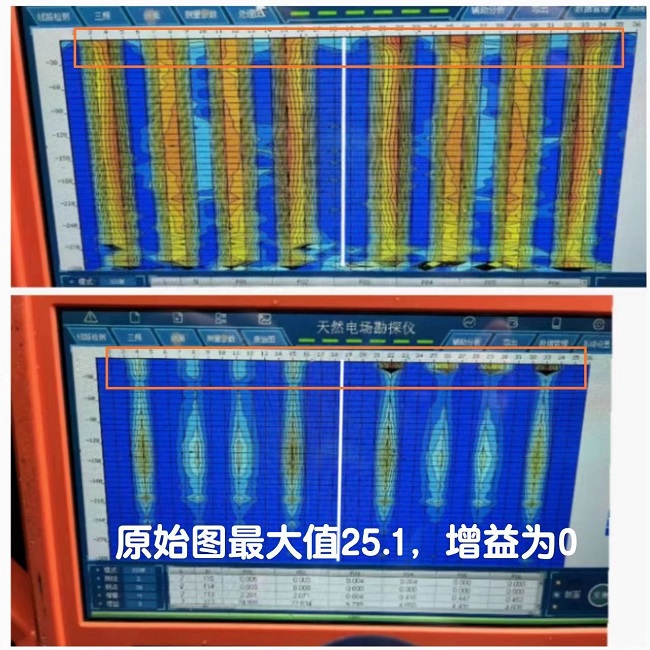 1, from an actual measurement of the sky electric map by the inspiration. The figure attached to this paper is a diagram of PQWT-GT Auto-analysis Geophysical Detector in a vegetable greenhouse area on Arbor Day in China. The shallow layer was already thawed at that time, but the deeper part was not yet penetrated. The top image is the processed image and the bottom image is the original image. The first 18 points are the first pass and the last 18 points are the second pass (in situ retesting).

There are 4 red columns and 5 blue columns in each time in the figure, and the two times are exactly the same, and the red and blue columns all correspond exactly, which means it is not interference, but real. To explore its causes, please see the abstract of the paper below.

2. Study on the relationship between permafrost resistivity and its temperature

3, From the above paper, it can be seen that there are several factors affecting the resistivity magnitude of frozen soils as follows.

3.3, If all other conditions are equal, the ρ value of a sandy soil is greater than that of a clay soil.

3.4, If other conditions are the same, the lower the temperature, the more water is frozen and the larger the ρ value.

The above factors also affect the magnitude of the value of the sky electricity.

According to the above-mentioned laws, combined with this article and the relevant measured drawings, the following preliminary understandings can be summarized.

4.2, the red columns in the attached picture of this article are more red in color in the shallow surface layer, we think is this is a reflection of the permafrost layer, indicating that these measurement points are slow to thaw and have greater resistivity, the red columns are caused by its high value downward transmission. Those blue bars also have larger values in the shallow surface layer, indicating that the permafrost has not yet completely melted, but the thawing is much faster than the red bars measurement points, and the resistivity is reduced a lot. In the processing map if only one color column is observed, another color column as a reference, it can be found that 90 to 180 meters and high values, we believe that this is the result of the superposition of the high value of the permafrost layer downward and the value of the deep high value layer, there is a high possibility of water. As for the measurement point permafrost melting why there are fast and slow, according to the study of the above paper there are a number of influencing factors, as a water finder can not go deeper.

4.3, in the early spring of the thaw period natural electric field ground water detectors in the measurement map of the phenomenon of vertical zonation there are light and heavy are normal. It is possible to analyze the variation of lithology in the vertical direction without the artifact of red and blue columns. Generally do not consider the deep lithology as changing in the lateral direction. If you must use the change in lateral direction to set the well must do misalignment retesting to verify. In order to try to avoid the vertical zoning phenomenon caused by the downward transmission of high and low values due to different rates of permafrost thawing, which causes difficulties in the analysis, when choosing a logging line, you should try to choose a measurement where there is no obstruction, little change in lithology, little change in wet and dry soil, no backfill and little disturbance.