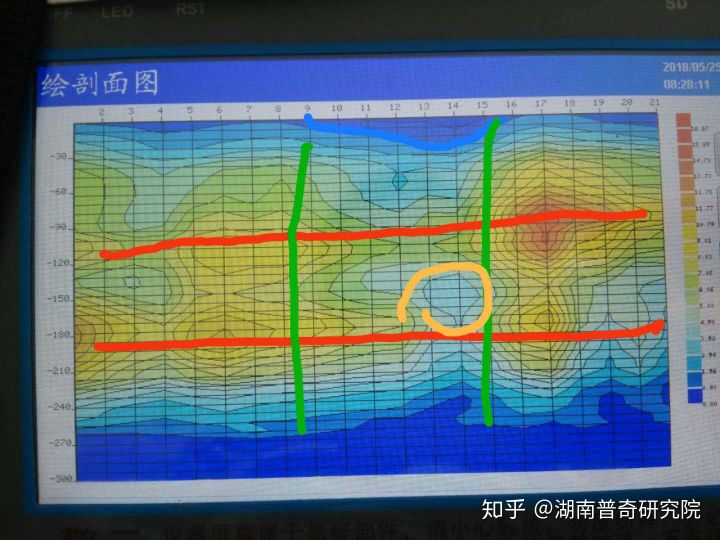 This is a ground water detectors plot of a mixed type of horizontal and vertical zonation with granite lithology. The thickness of the dark blue at the top reflects the variation of the thickness of the strongly weathered layer, and due to the effect of its low value of downward transmission, the values in the range of 9 to 15 below it are lower than the left and right sides. If we exclude the influence of downward transmission, the high value points are connected to the two red lines drawn, which reflect two layers of hard rock, and between the two red lines are less soft rock layers. 13 and 14 yellow circles within the low value circle, although the value is also reduced by the influence of shallow low value downward transmission, but still much smaller than the high value of the left and right, in the range of two or three meters such low value can not be any change in lithology, can be It is judged to be the change of fracture rate. The equivalent circle outside the yellow circle is only its diffusion halo should not be considered. Then down the inverted v-shaped will still have water. The actual hit 200 meters out of the water 5 square / hour. The maximum value of the color bar of the graph is 16.67, and no flying point to pull up the value, indicating that the rock is generally too hard, bad weathering, so the water is not very large.

According to the principle of "backward and oblique"; the fault is difficult to get water, the fault surface is fragile and has cracks, water will seep down, naturally, no matter how to drill wells, it will not come up; "backward slope" is "convex The "back slope" is "convex" and the rocks in the middle are hard and higher than the average thickness, so it is futile to dig a well in such a location. The vegetation of "back-sloping" mountains is sparse, while moss-like vegetation is generally richer. "Obviously, water seeps into the bottom of the rocks, and drilling a well from above is more effective, not only because there is less work, but also because the water is constantly available. 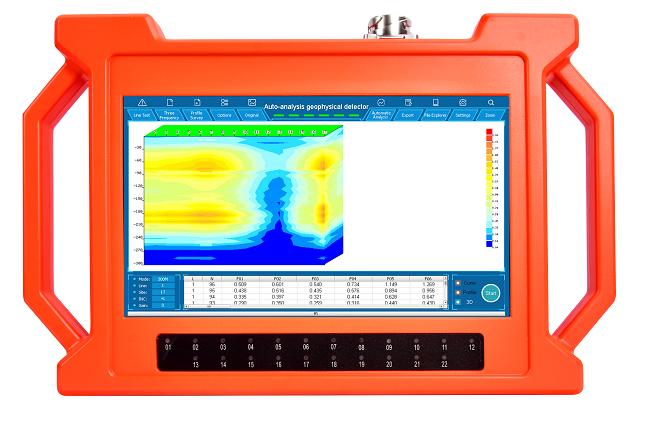